One of the major points of confusion and poor execution I still see today is the approach that many take to migrating files to Microsoft 365 and Office 365.

Many years ago I wrote a number of articles about this:

and all of that is still valid and I recommend you read it, however the technology has moved on somewhat and it is now perhaps time for an update.

What I’ll cover here is a framework for migrating on premises data, typically on file servers in network shares, into the collaboration tools in Microsoft 365. And that’s the first point. You need to look at this across all the services Microsoft 365 provides you today. Not just SharePoint. Not just OneDrive. And not just Teams. Microsoft provides a range of services that you should consider in this file migration process.

Now many claim that because of all these options it is too complex and therefore you should just dump your data in one place. I can’t tell you how many times I’ve see exactly this, everything from a file server F: drive dumped into a single Document Library in SharePoint. Oh the pain. 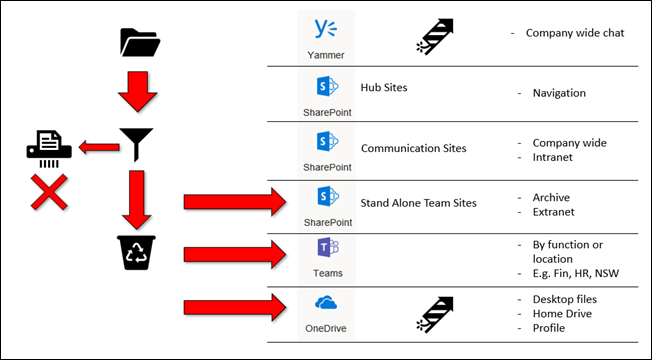 The secret of success is to have a “system” and not do things randomly without thought. Thus, my framework is shown above. Now let me break down the pieces for you. 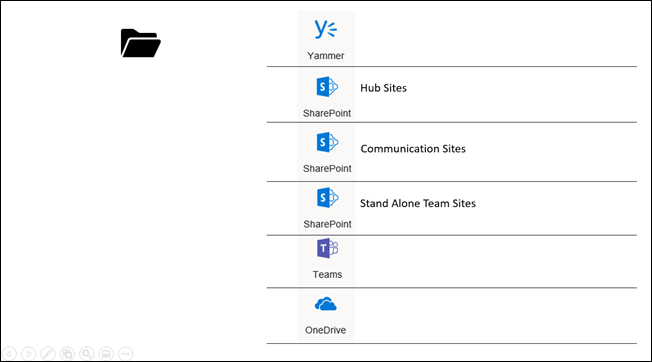 You firstly start with the source (on the left i.e. a file server drive) and the destinations (on the right, i.e. collaboration services in Microsoft 365). 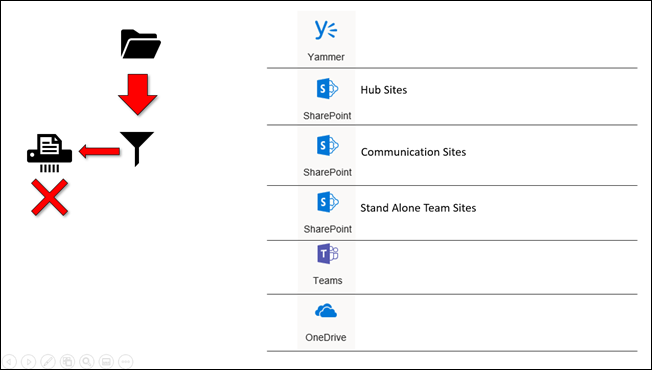 The first step is to filter the source information and remove (yes I said DELETE) stuff that doesn’t make sense to move. Old and duplicate files are example but I have highlighted this in more depth in a previous article:

Thus, you should now have less data to move because you have thrown some away. If you haven’t then you are not being serious about this. You should also have a better idea about what data to archive, what is user data, what is common data and so on. 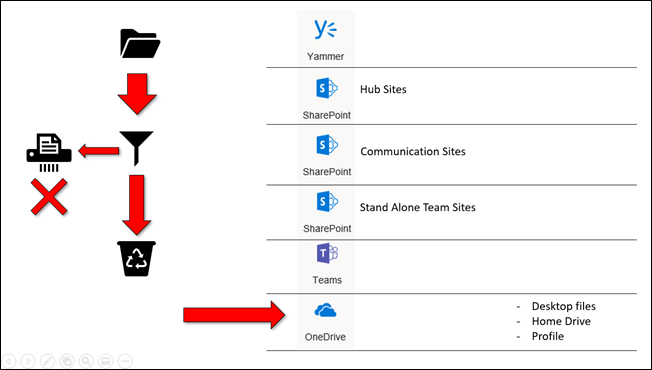 With the remaining good data you move (yes, I said move NOT copy) users personal data to their OneDrive. You actually get them to do that so firstly they get familiar with the new environment, they move only what they want to keep and you crowd source this task reducing the workload. We all know that some people will never ‘get around’ to moving their data, so after a suitable time period has elapsed you move it for them. The typically data that is moved in this process is anything on the desktop, home drive or in user profiles. 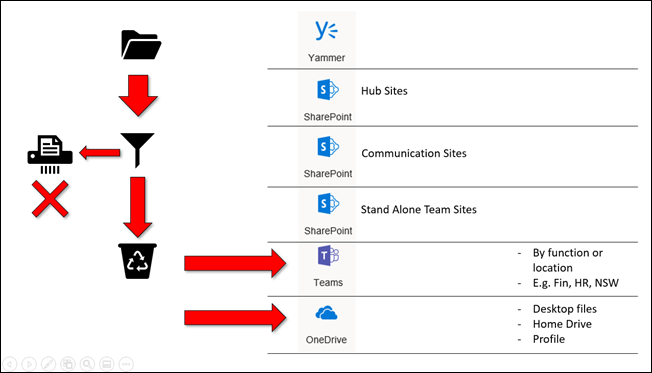 Next, is to identify the common data by function or location and move it to a Microsoft Team. In a typical on premises file server the existing shares you will find data stored in folders like F:\Finance and F:\Administration and so on. These top level shares are most likely going to be the name of the Team and the next level down folders to be the channels inside that Team. In many cases, users may also wish to ‘clean up’ the existing or ‘start fresh’, which is also fine. However, it is relatively easy to find the data that should go into a Microsoft Team and move it there. 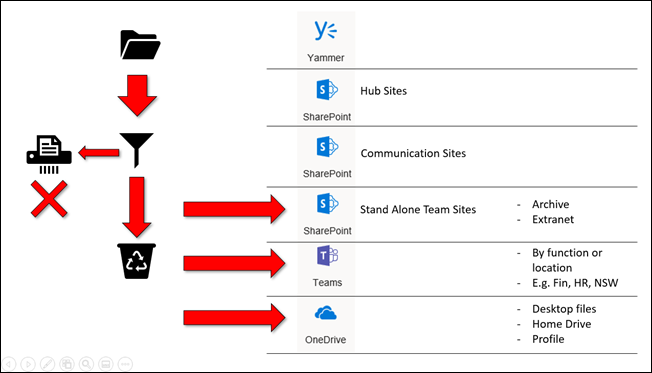 The next data to move is common data that makes sense living in it’s own dedicated SharePoint Team site. Data that goes into stand alone SharePoint is data that does not require chat and conversations around it, Teams is where that data would live.

The best example here is probably Archive data. This is data the business want to keep ‘just in case’ but won’t be updated by users. Thus, you move the archive data as is, into it’s own designated SharePoint Team site, mark it as read only for everyone so they can use it as a starting point if they need to. The major advantage of moving the archive data to SharePoint is that it is now searchable using the tools in Microsoft 365. 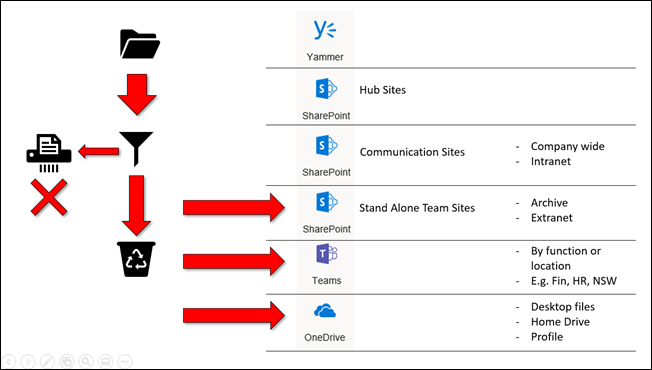 The data that is now left is typically company wide data like policies, procedures, manuals, etc. This is then moved into the traditional ‘Intranet’ using a nice pretty SharePoint Communications Site. This Intranet is available to all and typically used to consume data i.e. get something, read something. New data for this Intranet comes from the output of the individual Microsoft Teams created earlier. For example, imagine the Finance team produces an annual budget. They do this creation inside their own Team and publish the finished result into the Intranet for everyone in the business to consume. I’ve covered this concept in greater detail in a previous article:

The layers of Office 365 collaboration 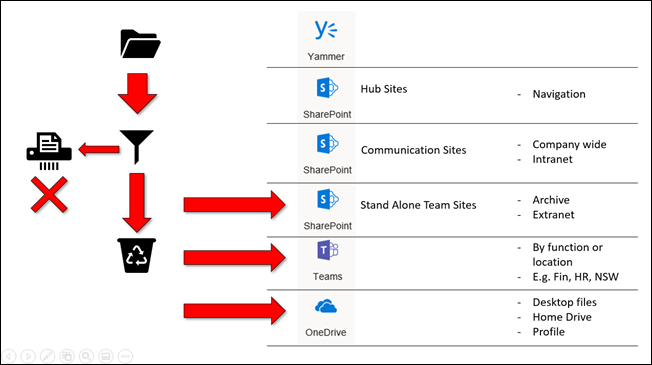 Now you have data all over the place inside Microsoft 365 as many will point out correctly. What’s missing is a consistent method of navigation between all these sources to make it easy for users to navigate. This is where SharePoint Hub Sites come in. You uses this to provide a consistent navigation over the top of all your data. To users this makes it all appear very logical and structured (even perhaps like their old file server) and yet provides the flexibility to be reconfigured at any stage and have those changes automatically applied across the whole structure thanks to SharePoint Hub sites.

The final layer is Yammer. This is for company wide communications such as water cooler chat (birthdays, sports, holidays), information on how to better use Microsoft 365, questions about the business, messages from CEO, suggestion boxes, what’s happening with the business or competition, sales, wins and so on.

Like the Intranet, Yammer is designed for corporate wide chat that doesn’t fit into any specific Team (which are arranged by function or location). I have detailed the importance of Yammer in a previous article:

Why Yammer is still relevant 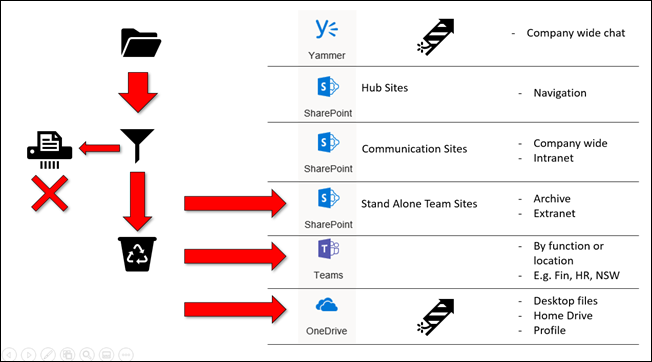 Now that you have a linear framework that builds on top of itself, hopefully you have a better picture of where you can put data from a file server into Microsoft 365. Having a framework is great but more importantly is how to get users to also adapt to working in this way. My approach is to start with Yammer and OneDrive first as I have detailed previously:

Focus on the ‘Me’ services first

In short, if users get used to working with just files using OneDrive and then with just chat in Yammer, they will find it much easier to then move to Teams which is effectively files and chat combined. This thinking stems from:

The rule of three

I advocate to not over load people. This is because you need to:

You can have the greatest technology in the world but if no one uses it then it is pretty much wasted. that’s what I see with Microsoft 365. Not enough through and time is devoted to adoption and transformation. Most migrations are done as fast as possible to ‘close the ticket’ and move onto the next. The fallacy of that rushed approach is evident in failed adoption and user frustration.

So there you have it, a framework for migration of file data into the world of Microsoft 365. You can use this framework in whatever way makes sense to you. You can use all of it, none of it or as a basis for your own approach. However, the key message is to HAVE a process rather than something random. Remember, moving to a world of collaboration from a world of storage requires transformation not just migration!

Once you have the top level framework or process, you can then start developing individual frameworks and adoption processes for each piece. That is, one for OneDrive, one for Teams, One for Yammer and so on. Once you have these processes, next you can start automating them to improve reliability and allow you to scale. Without a system you can’t automate. Without automation your effectiveness and profitability continue to fall, so investing the time in a collaborate system is definitely worthwhile. It makes users happier and it makes IT more profitable! A win – win. That is what a move to Microsoft 365 should be all about!

5 thoughts on “A framework for file migrations to Microsoft 365”