Over my time I have seen so many Azure solutions built in ways that are contrary to agreed best practices. Why does this happen? Typically, it is because people bring old concepts and methodologies to new environments like Azure. Yes, many of the fundaments are the same. Things like TCP/IP, networking and the like are the same as on premises but others are very, very different.

One of the key differences when it comes to storage with Azure Virtual Machines (VMs) is the disk topology. When you spin up an Azure VM you typically get two drives, C: and D:. C: is the boot partition and holds the operating system while D: is a temporary or caching disk that gets recreated upon every reboot.

Above you can see an example of a topology from an Azure machine. You will see that D: has the label ‘Temporary Storage’.

A closer looks at D: reveals the contents shown above.

If you look at the contents of the warning file you see the above. Note the first line which says (in capitals):

WARNING: THIS IS A TEMPORARY DISK

Why am I emphasising this? I can’t tell you the number of people I have seen bring previous practices to Azure and put production data (such as Active Directory Databases) onto this temporary drive because ‘this is the way they have always done it”. That unfortunately, is only going to end in tears.

Best practice when it comes to Azure is to always add data disks to Azure and start the labelling from F:. Yes, there is an additional cost for adding data disks but that cost is small compared to the flexibility you gain.

Case in point. I have a nested virtualisation server running in Azure that hosts a number of machines for testing. This machine has two data disks striped together for storage and performance optimisation. Using striping is another change from the ‘de-facto’ that I’ll look at in an upcoming article.

Unfortunately, when I put on some recent Windows updates the machine decided it no longer wanted to boot. I tried all the troubleshooting tips to get the system to boot but to no avail.

I therefore went in to the disk configuration of the failed machine and ‘detached’ the existing data disks, which as you can see, you can do from the Azure portal, although there are also PowerShell commands to accomplish this.

With the data disks ‘freed’ from the original failed machine, I proceeded to create a new virtual machine to mirror the original failed host. After doing this I went to the disks area of the new machine and selected the option to Add data disk. However, instead of specifying to create new clean disk, I elected to use existing disks and select the ones that I had detached from the failed original.

When I now looked at the new machine, with the existing disk attached, I found that the striping environment was already in place and needed no further configuration. All I needed to do was to restore my virtual machines that were on the data disks using the Hyper V manager. All really simple.

If I had installed everything on the C: drive then I would have lost the lot and would have needed to rebuild every virtual machine in that Hyper V environment from scratch. That would have cost me a lot of time, where in fact the total recovery time here was only a matter of minutes. That’s a BIG difference!

Here are the slides from the February Azure webinar where we took a look at Azure networking.

The recording is also available at:

which CIAOPS patrons get free access to as part of their subscription.

This webinar set more of the ground work for upcoming monthly webinars that will go deeper into Azure features and abilities.

So make sure you sign up for next month’s webinar.

Good to see such large numbers for this month’s webinar. Obviously, a topic of great interest to many.

Slide from this month’s webinar are at:

f you are not a CIAOPS patron you want to view or download a full copy of the video from the session you can do so here:

We looked at PowerApps in this session

In the absence of Marc Kean who is busy at Microsoft, let me introduce my new co-host Brenton Johnson from Uptake Digital. Brenton comes from a ‘born in the cloud’ IT business that looks after customer’s digital needs and implements cloud solutions for them. In this episode we meet Brenton and find out about his background, we also cover some new and updates from the world of Azure and Office 365. Have a listen and let us know what you think of the changes. We are still finding our feet in absence of Marc.

Take a listen and let us know what you think –feedback@needtoknow.cloud

You can listen directly to this episode at

I recently wrote an article about

that ran through the process of what happens when users go offline when working on shared files.

After doing some more poking around in the latest OneDrive for Business sync client I found this under the Office tab in Settings: 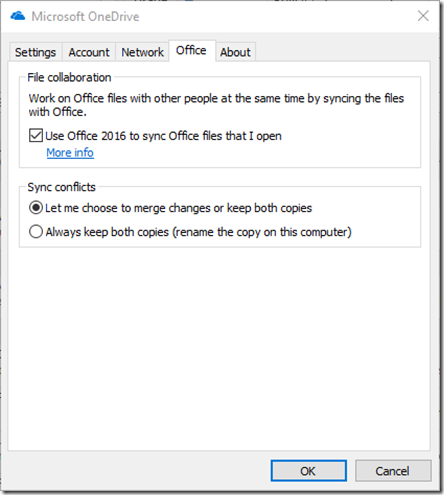 You can find more information on the first option here:

Use Office 2016 to sync Office files that I open

If you turn off this setting, Office will no longer be able to automatically merge changes from different versions of documents. You’ll also be prompted to upload a new copy of a file before you can share it directly from an Office desktop app.

You can also elect how to handle Sync conflicts, which by default is set to Let me choose to merge changes or keep both copies.

The defaults options are going to suit most people but you can go in a customise these if you wish to improve how conflicts are handled in your environment. 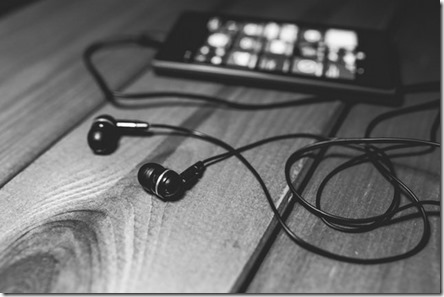 Apart from my Kindle and Audible consumption I spend a lot of time listening to podcasts. Whether travelling in the car, on the train, out walking, taking a flight, wherever. I’m not usually far from a having a podcast in my ear.

The latest Microsoft news with some fun and entertainment along the way. Paul Thurrott’s musing make this podcast alone something worth listening to.

Some really great advice, business insights and strategy. Also lots of life lessons that I have found work really well for me. A weekly must listen for me.

Beginning to lose it’s interest for me. Becoming too Dev heavy and repeating stuff that I know about. Also, becoming a bit too much of the ‘space nerds’ podcast.

Not a regular event but when these episodes drop I’m all ears. They are are deep dive into history told by a master narrator. If you love history, you’ll love these episodes.

Probably too hard core for most. For me it is a great mix of military history and business mindset training. If you have a ‘fanatical’ tendency then give this one a listen.

Still some worthwhile content but becoming less so for me. Maybe time to put this one on the back burner for a while.

An Australian show that walks you through the basics. Needs some deeper content to keep me listening long term but for now a good summary and getting started point for crypto, especially if you want an Australian bent.

A lot of news around the MS Cloud but also a lot of snide comments about unfavoured MS services which can be a tad grating given they do have value to many. Short and sweet but perhaps too short? Again, another one up for review in 2018.

A bit like the Tim Ferriss podcast. Plenty of interesting and different stuff that always makes you think. Somewhat irregular episodes but I am still enjoying what I’m hearing.

I listen to all episodes at at least 2X speed to allow me to crank through most of these episodes in a week.

There are also a few new podcast I’ve recently picked up on that I am still evaluating as to whether they’ll remain favourites. I currently download them all but do I listen regularly? Probably not. if I have missed a few episodes then, after a while, I’ll probably remove them from my play list. Finding informative and enjoyable content is proving harder for me of late.

Since 2010 I have published my own podcast:

which covers the Microsoft Cloud (typically Office 365 and Azure) as well as business topics. I encourage you to have a listen and me know what you think.

So what do you listen to and recommend?

One of the really cool things Azure has introduced recently has been it’s Cloud Shell. 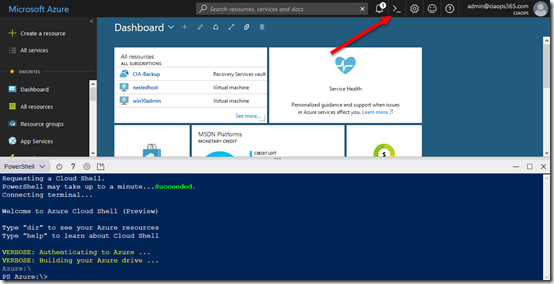 This is the ability to run a PowerShell command line window directly in a browser or on a mobile device. You did this by selecting the shell icon in the portal as shown above. When you did so you got a command line in the lower half of your browser. Really handy.

Now all of this is happening in a browser and until now you needed to access this by logging into the Azure portal. Well, if you now navigate directly to:

You’ll be able to login to the Azure Cloud Shell directly. 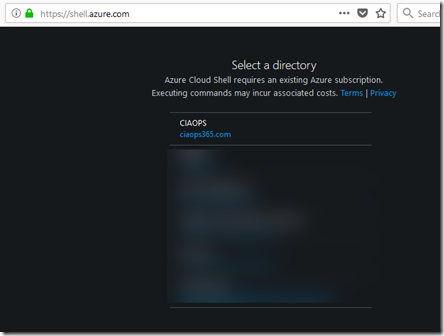 When you go there you’ll need to select a subscription to use (in case your have a few). 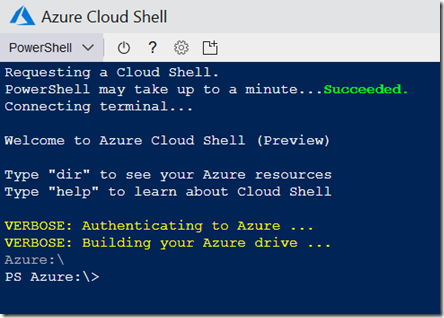 Once you have selected this an Azure Cloud Shell will spin up right in your browser as shown above. It may take a few minutes to do this and actually get to the command prompt, so be patient. 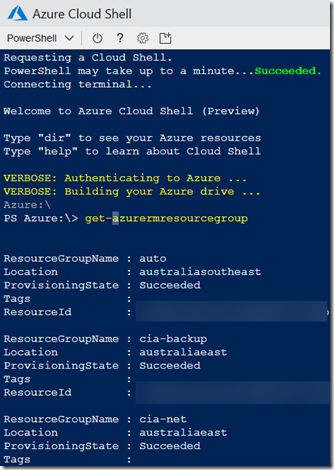 Once there, you can execute PowerShell commands against the tenant.

How cool is that?

Much of the diagnostic detail relating to emails is buried in locations that you can’t see. If you have the need to examine email messages for troubleshooting or security this can be a challenge. 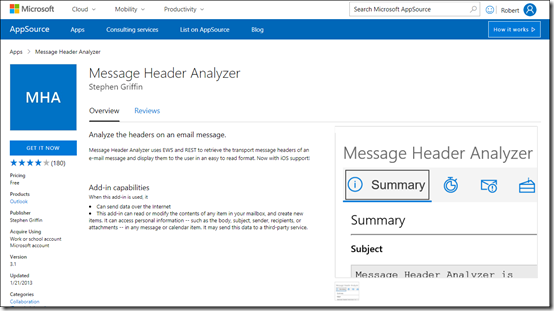 A great tool you can add to your arsenal is the free Message Header Analyzer which you can find here:

Once installed you will find an additional button in your OWA:

That when selected will give you a range of options you can use to dive deep into the technical information surrounding the email in question. 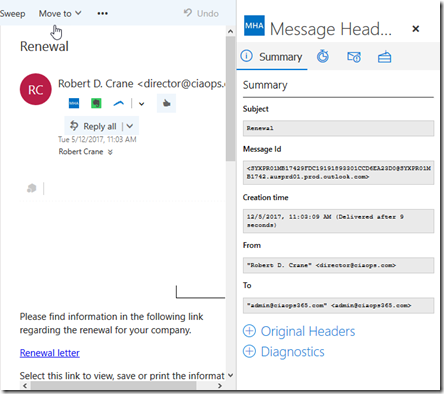 I especially like the ability to dig into the SPF and DKIM style details.

If you need in to do any troubleshooting or email analysis on a regular basis I’d highly recommend you add this to your inbox.