Recently, I wrote the following article:

which took you through the process of getting Message Center information into Microsoft Planner. as good as that it is, the best place for that information should really be in Teams. The reason? With Teams people can ‘chat’ about the topics which adds far more value for an organisation in my opinion.

The good news is that it is very easy to not only sync messages with Microsoft Planner but also have them displayed in Microsoft Teams. It is all accomplished using Power Automate.

Create a new Flow and use the When a new task is created trigger as shown above. You’ll then need to configure this trigger action to point to the same Microsoft Plan into which you have already set up to sync with the Microsoft Message Center.

The next action should Get task details as shown above. You’ll need this to actually read the notes from each task, which contains the details of each item from the Message Center.

For example I remove the /r/n characters and replace them with the HTML line feed tag </br> using the following expression:

Once I have the Description field formatted the way I want it then I use the Post a message (V3) action as seen above. The Title of the new task from Planner is the subject of the thread and the body is my now nicely formatted Description field, which is the data from the Message Center item. 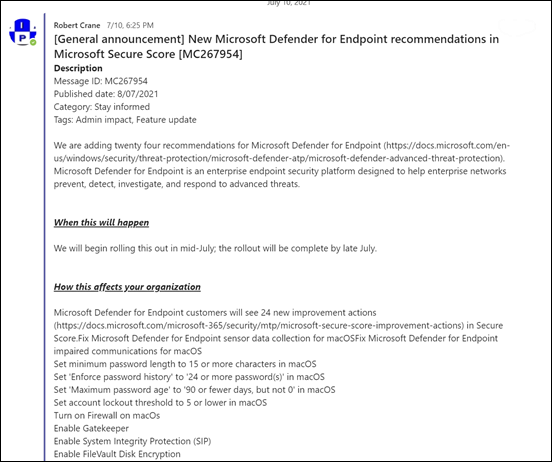 You can see the result in a channel in Microsoft Teams above. Now others can easily add their reactions, comments and generally collaborate far easier than within Microsoft Planner.

I think having the Message center information delivered to Microsoft Teams make a lot of sense since it is a place more people will be spending more of their time generally. However, getting the Message Center information into Microsoft Teams still requires the sync configuration to a Plan first. However, once that is done, Power Automate allows you to achieve just about anything!

7 thoughts on “Getting Message Center information into Teams”