I continue to be a big supporter of the Windows Phone platform for many reasons, even as the market dwindles below one percent. I agree that there certainly aren’t as many apps as there are on Android and iPhone but that is not the whole story here. So let me explain my thinking on why Windows Phone is going to be so much more relevant in the future and thus why you shouldn’t write it off.

The growth in mobility is huge. Mobile devices out sell traditional desktop PCs by more than five to one with that growth only accelerating. Clearly, mobile is where it is all going. As our mobile devices become more and more capable we use them more and more and our traditional desktops less and less. You would then probably agree that there will come a day in the not too distant future, when the majority of users will have a mobile device as their primary device at work.

If a mobile phone is now your primary device all you really need is the ability to hook it up to a large screen and normal keyboard and ‘voila’, you now effectively have a desktop. So it would seem that the future holds people having a mobile phone they plug into some sort of docking station when they want to use it like a desktop.

Let’s turn our attention to the growth of the mobile phone market for just a second. Apple were the first to market with the modern mobile phone as we know it today. They still dominate the market because they have continued to capitalise on that innovation. Android emerged as a strong, and now dominate, competitor because it allowed more apps to be developed on its platform more easily than Apple. The analogy would be the state of play when it comes to desktop software, i.e. Apple Mac vs PC. Microsoft has a platform that was much easier and more widespread to develop for. Thus, it became the dominate player in the market.

Ok, so how do these concepts relate to Windows Phone you may ask? In one word. Continuum.

Continuum is a Windows 10 technology that allows the device to automatically reconfigure itself depending on its form factor. If you take a Windows 10 Surface machine and detach the keyboard, thanks to Continuum, it instantly changes the interface to be that suit for a tablet.

That’s great for PC’s with detachable keyboard BUT now think about Continuum on phones. You have a phone that you plug into a docking station that converts it to a desktop. As I mentioned before, this most agree, is the direction we are heading with mobile devices. That indicates to me that Microsoft is already ahead of the game with this concept. Android and iPhone don’t have that ability as yet to my knowledge, so Microsoft is already gaining experience in what will be the future of the way the majority of people use mobile phones. 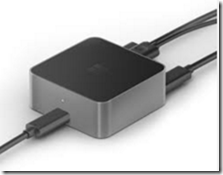 I have a Lumia 950 XL phone that is running Windows 10 (and Continuum). I also have the phone docking station( (shown above) that allows you to connect your 950 XL to and then connect a Bluetooth keyboard and mouse, an external monitor as well as plug in USB storage.

The dock small enough to be carried just about anywhere, so now I can transform my phone effectively into a desktop PC anywhere I am. 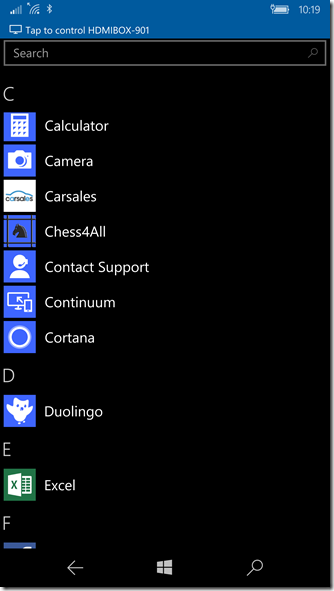 The way you do this is to plug the phone into the dock and then select the Continuum app from the list of apps on the phone. 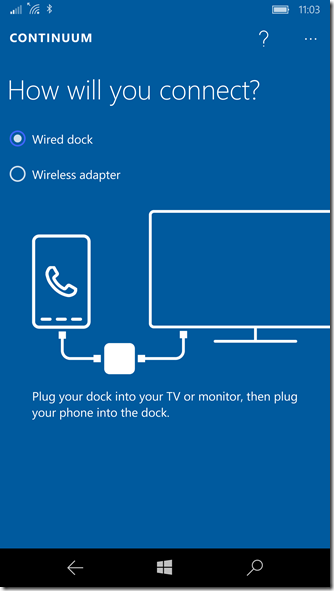 You then let the phone know how you’ll be connecting to the dock, either wired or wirelessly. Again, note here that Microsoft has recognised that wirelessly connecting is going to be the easiest way for people to use this. That is, as long as the phone is near the dock, it will seamlessly connect to your full size keyboard and screen, transforming into a desktop PC . 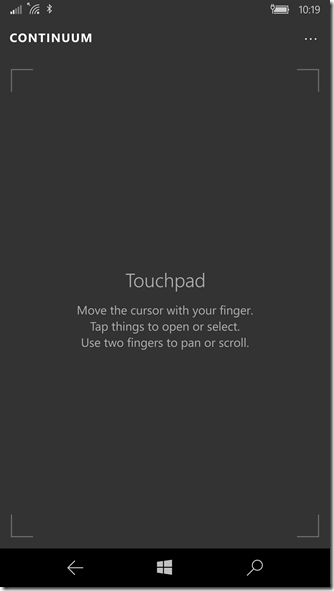 Once Continuum is active the phone screen becomes a mouse pad, as shown above, and you have a Windows 10 desktop on the large monitor you are connected to. Thanks to my Bluetooth keyboard and mouse I effectively now have the full desktop experience. 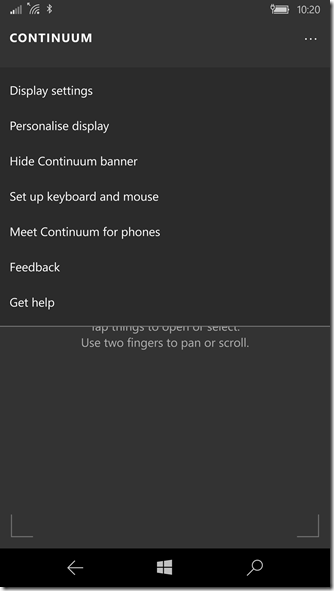 You can go in and adjust the setting for Continuum on the phone as shown above. 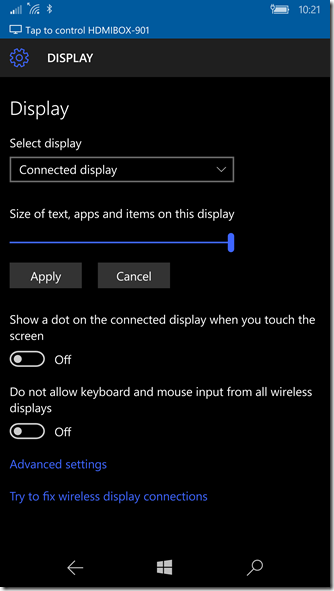 You can adjust the display as well. 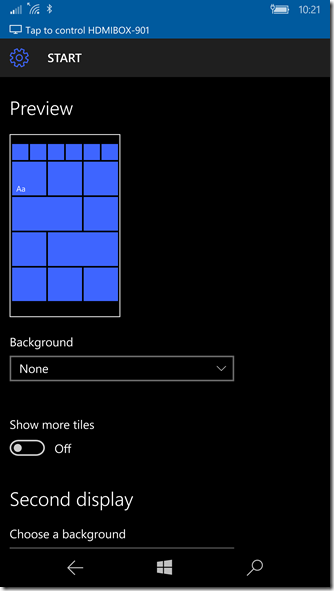 As well as controlling the desktop experience.

Now thanks to Continuum I have a Windows 10 desktop and a phone. Even with Continuum in operation, I can still use the phone as a phone, make and receive calls, run apps, etc.

You’ll get a much better idea of Continuum from the above video.

Thanks to phone based apps like Excel, Word, PowerPoint, etc you can still get your work done directly using the phone. Apps have to be written to support Continuum which many still need to be converted but for example apps like FitBit, TED and Audible are Continuum ready. I would expect to see more and more apps become Continuum ready in the future.

Of course the naysayers are going to point to the fact that you can’t run ‘normal’ desktop apps that businesses need to work because they only run on an Intel platform. Agreed, but the Windows 10 phone has a Remote Desktop app that allows to connect to any any desktop. 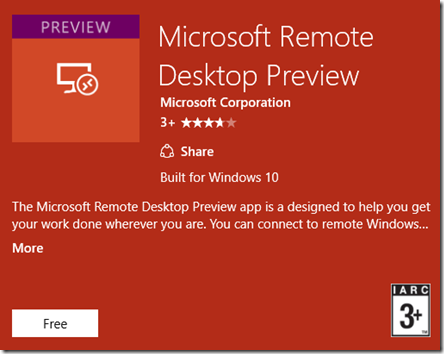 So now with this Remote Desktop app on my phone and with my phone connected to a large keyboard, screen and standard mouse I would suggest to you that I now have a complete desktop replacement.

In my case I used this Remote Desktop app to connect to an Azure VM without issue and run normal desktop apps just as you would on a PC. So now with the power of Windows 10 phone and Azure do you really need to have traditional servers and desktops inside the business? I’m thinking not.

So now, thanks to the Remote Desktop client, you have full access to all the software that is written PC’s anywhere, all directly on your device.

If you step back and take a look at what Microsoft is doing with Windows 10 phone in light of Continuum, I see them investing in a key mobile trend that most agree is the direction we are headed (just like Apple did with the iPhone). I see Microsoft allowing users the ability to connect to their legacy apps and continue to develop on existing platforms yet have these accessible via the device, thus giving users access to the greatest range of software (much like Android).

Thus, many have written off Windows Phone, however I’d suggest that people are overlooking how rapidly this market continues to develop and to be truly succeed you need to be play where ‘the ball is going, not where the ball currently is’. I don’t see Apple or Android investing in this replacement desktop paradigm, it is only Microsoft. In my mind that gives Microsoft a HUGE advantage in the mobile space and is the reason I see Windows Phone as a platform with far more potential than many see.

Those who look to the future and prepare stand a better chance of winning than those who only consider today. There is still a long way to go and much more development will be required but importantly (like Apple and iPhone), I think Microsoft and Windows 10 Phone is well placed to lead the pack going forward. So, ignore Windows 10 phone at your peril.