The above video is an interesting presentation around a ‘new variant of ransomware’ (to quote the video). In essence, what it does is trick the user to installing a malicious plug-in in for their Office 365 environment. That malicious plug can then effectively run riot across everything the user has access to, including shared files. The video shows how this control can be used to encrypt the users emails even though they are ‘in the cloud’. This is simply because the user has been tricked to giving the malicious application full access to their environment.

Is there a way to prevent or mitigate this risk? First the bad news. Generally, every Office 365 out of the box allows all users to add these types of add-ins to their environment. Typically, the ability is designed to allow legitimate Outlook plugins like Boomerang or Harmon.ie to be added to help the user be more productive. However, that also means malicious add-ins can also be easily added just as the video demonstrates. So, it is definitely a security issue to pay attention to.

You can verify whether this option is enabled in your Office 365 tenant by firstly connecting to Exchange Online PowerShell and then running the following command:

If the result comes back as True then you are potentially vulnerable to this style of attack.

However, if you run this command:

Thus, add ins like the Exchange Message Header Analyzer are fine as they simply report on email headers but something like Harmon.ie, which requests access to resources will be blocked. 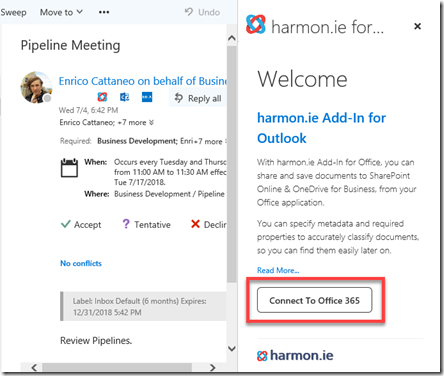 So above you can see the user has added the Harmon.ie add in to their environment. To use it, they need to select the Connect to Office 365 button highlighted. 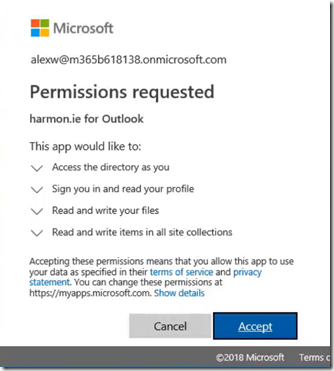 Normally the user would see the above Permission Request dialog, click Accept and the add-in would have access.

However, after disabling the ability for users to consent for apps this will appear as: 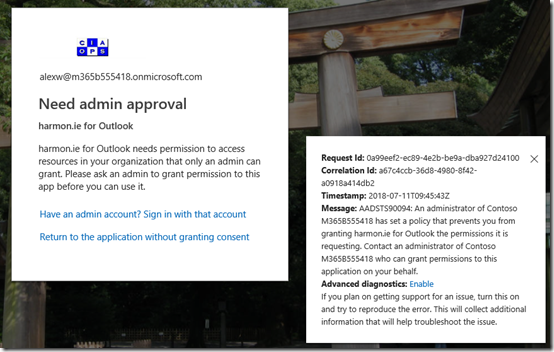 As you can see the user isn’t permitted to provide permissions, it can only be done by an administrator. This is going to prevent the user randomly installing add-ins as well as protecting them from potentially malicious apps.

Of course, the downside for administrators is the fact that they will have to consent to user added apps manually but that is small price to pay for better security I would suggest. As I like to say ‘Got access denied when you doing something silly? GOOD! That means the security is doing it’s job!”

My own experience is that users rarely add legitimate applications and if there is a need for them to be added they can be pushed out from the Office 365 Admin Center by an administrator and then authorised as needed on a per user basis. Alternatively, the required apps can be pushed out and authorised by users and then the tenant can be locked down.

However, in my opinion, out of the box, most Office 365 tenants should have this default ability blocked as shown to thwart the ‘new Ransomware cloud’ threat.