Helping users understand how Microsoft Teams fit into the current collaboration environment and when it should be used over things like Yammer and SharePoint is important. The following is my framework to help people understand how they should be thinking about collaborating. 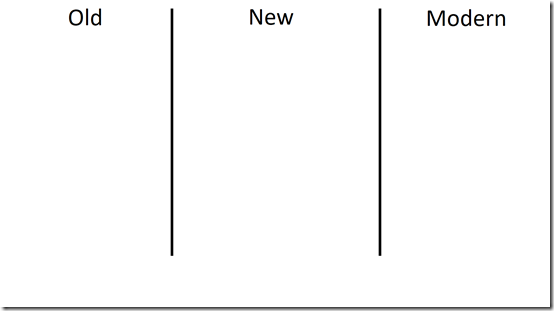 I believe there are three ‘universes’ when it comes to collaboration today – Old, Modern and New. 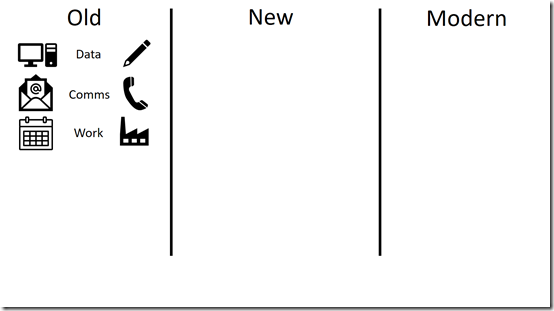 The ‘Old’ universe is a place where files are locked away in file server shares accessed via mapped drives or on local C: drives or even saved on external USB devices. It is however also still a place full of paper. People still find the quickest and easiest way to capture information is to write it down because little else is available.

In the ‘Old’ universe, collaboration is typically done via email. Find the file you want to share, attach to an email and blast it out to others. When that attachment returns, it may or may not end up in the original location. Typically it doesn’t, which means you end up with multiple copies of the same file strewn across many locations. Apart from emails the major way people stay in touch is using the phone. Of course a majority of the time you have no idea whether the person at the other end is busy, unavailable or away so you leave a voice mail. Then, of course, when the call is returned you are away so the game of phone tag commences.

In the ‘Old’ universe applications live in silos and require users to switch between them. If you want to share information between such applications you have to do this manually. Typically, your calendar is separate from your emails and contacts.

Finally, in the ‘Old’ universe you are expected to work from your cubicle at the office using a machine that is tethered via a blue patch lead to a jack on the wall. The only way that you can actually work is being in the office at your desk, there is no remote access and no ability to access data outside the four walls of the office. 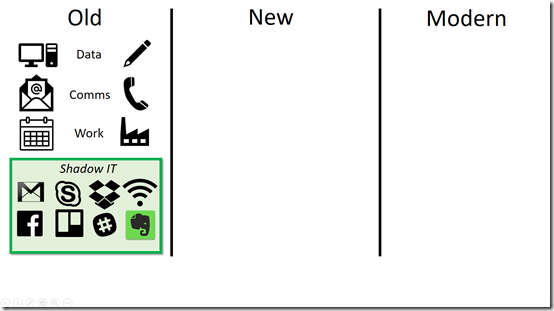 Unsurprisingly, users found working in the ‘Old’ universe very constraining. They then went to the traditional gatekeeper (IT) and asked for tools that allowed them to get their work done better, faster and in a manner that was more convenient to them. The response to this from IT was always ‘NO’. IT said that it was always too difficult, too insecure and too much trouble to actually provide these sort of abilities.

‘ShadowIT’ of course raises all sorts of issues around compliance and access to data. This however was of no concern to users who found the tools available from the Internet exactly what they needed, so they simply kept using them and then adding more and more.

This means that soon much of the corporate data and intelligence was on consumer grade system like Dropbox and Slack over which the business had no control, insight or management. 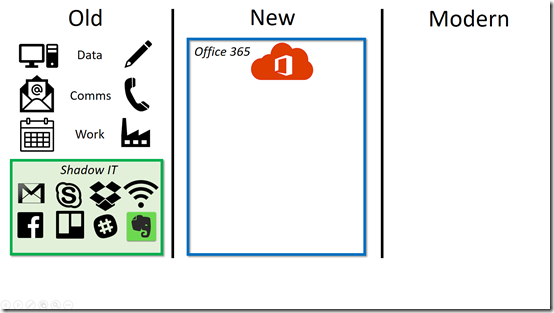 Smart organisations then started shifting their IT resources to the ‘New’ universe of cloud based services like Office 365 because they could provide the tools users wanted to do their jobs but also give IT admins back the control they needed. 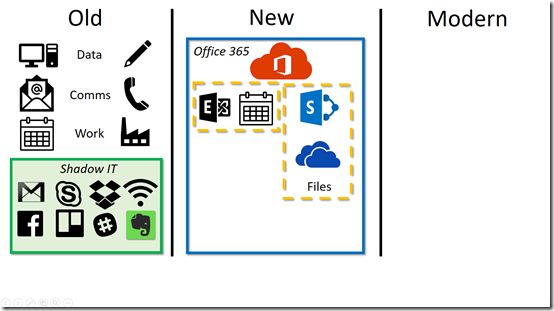 The great things that Office 365 also did was it provisioned many services together. Thus, when you enabled email you got a connected calendar that you could easily share with others. You also got a public (Team Sites) and a private (OneDrive for Business) area in which you could save and share your files. Also importantly, you could access all of this on your mobile device or anywhere you had Internet access. 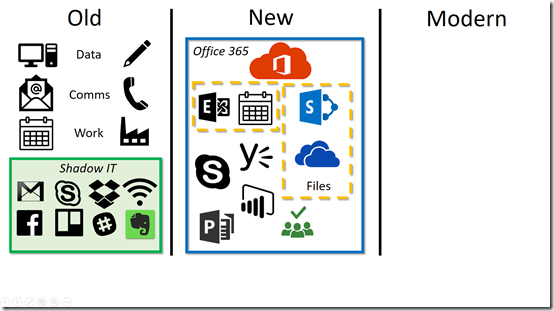 Office 365 also provided tools like Yammer for social, Skype for Business for communications and great new tools like Power BI and Planner.

However, the challenge remained that many of these services were still a challenge to provision and integrate seamlessly together. Yes, you can share files from Team Sites in Yammer but users remained puzzled as to how to do this easily because IT was still not providing them with the training and enablement they required. IT was still trying to retain control of this ‘New’ universe while struggling themselves to understand how it should all be managed. 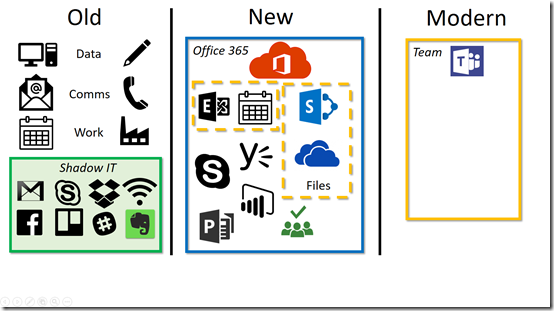 Users became frustrated again because the tools they needed were now available but still not easily provisioned. They also still had to go to IT to get things configured and that was just slowing everything now in their eyes.

Enter Microsoft Teams, which heralded the ‘Modern’ universe. Here users simply had to give their team a name and everything they required was automatically provisioned. 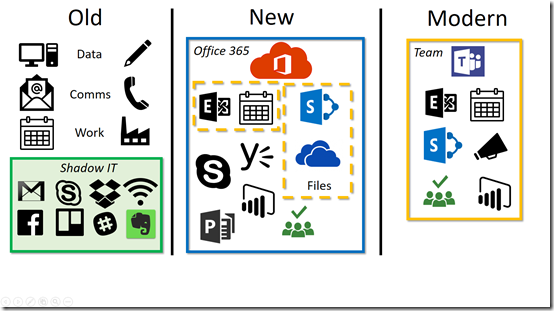 When users created a Microsoft Team they got things like an email distribution list, a shared calendar, a dedicated place to store files (Team Site), a place to chat, a place for tasks (Planner) and so on. They also got the ability to access all of this inside a dedicated app on every platform overcoming the need to keep swapping between applications. Now everything they needed was presented in a single common consistent interface.

And of course they flocked to this ‘Modern’ universe leaving the others behind. 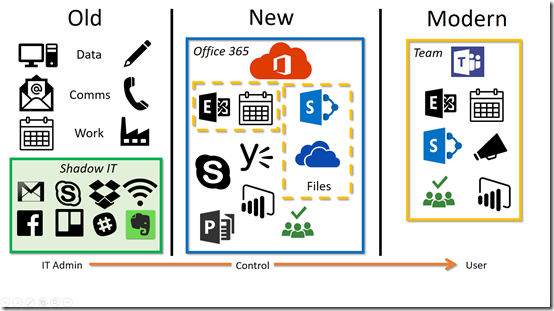 So, when you take a step back and look at the transition that has occurred between these universes you can see how the balance of control has shifted from the IT Admin to the user. Now users can provision everything they need themselves. They get all the resources they need immediately. No longer do they have to wait for IT to provision things.

The users are now in control of technology. 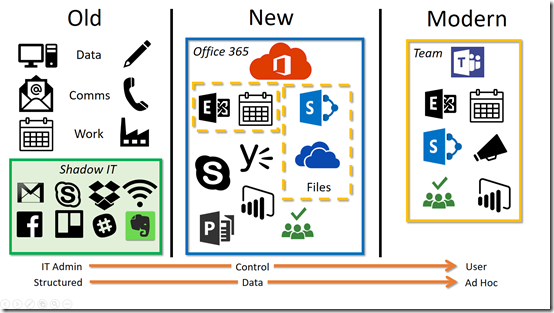 The move to a ‘Modern’ universe has also meant the move away from structured data in files and folders. It has moved away from the structure of common Team Sites, Document Libraries, Subsites and the like. Microsoft Teams provisions things like Teams Sites but only surfaces a simplified interface for users. Users don’t care whether things like files are in this Team Site or that Team Site. As long as they can see their files they have no interest in understanding the structure it lives in. Also, if they can’t find what they are looking for they don’t trawl through the structure, they search. That’s the modern way, you search for for what you want.

Data is no longer structured as it once was. Search provides the ability to find stuff making the structure it lives in largely irrelevant. 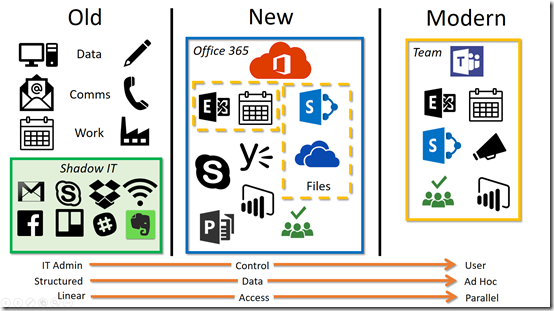 Finally, the ‘Modern’ world moves us from a linear world of working through our inboxes top to bottom and through mapped drives, folders and sub folders to a world of being part of multiple teams, multiple chats, multiple channels, multiple document locations all at once. This universe requires being across a lot more information and switching between it faster. This is what today’s tools provide and this is the way users want to operate.

After presenting this to customers I ask them which universe they want to live. Nearly every one wants to live in the ‘Modern’ universe. Why? Because this the way their staff are ALREADY working. They also appreciate that this is the universe we are heading towards, so why not jump on board now rather than continue to live in the ‘Old’ universe and fight what users want?

Once customers have made the choice to live in the ‘Modern’ universe there is a need to develop a plan to actually get them there. There are also still reasons to have some of your stuff in the ‘New’ universe (typically global information). However, most of the specific information moves into Microsoft Teams.

Apart from the challenge of migration to and adoption of the ‘Modern’ universe there is also the challenge of compliance. How is stuff backed up? What happens if it is deleted either maliciously or on accident? How are permissions handled? All very important things that need to be addressed and I’ll do that in upcoming articles. Moving to a ‘Modern’ universe doesn’t make many of the fundamentals of IT disappear it just changes them. That change means that both users and administrators of the systems need to also change if they want to stay current.

As they say in IT, the only thing certain about the industry is change and if you don’t embrace change you’ll be left behind. Microsoft Teams is a further change that users are embracing wholeheartedly, because it is the way they want to work. However, traditional IT Pros are falling behind, trying to resist the inevitable. It’s time for them to embrace these changes, learn the ‘Modern’ way and provide the same service they have always provided their users not try and hold them back.

Microsoft Teams means a universal shift for everyone. It’s already here so get on board!

One thought on “The modern way of collaboration using Microsoft Teams”