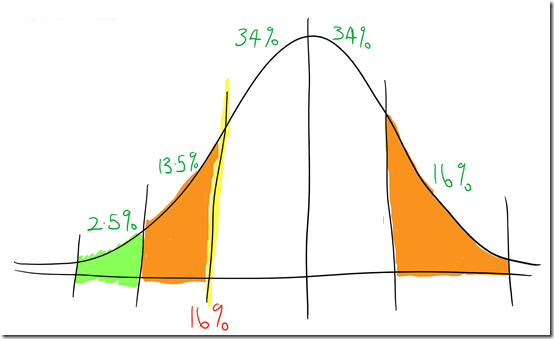 I’ve been doing a lot of work recently helping businesses drive SharePoint and Office 365 adoption, in many cases after a failed implementations. I thought that I’d share some of my thoughts about the process for everyone.

Above you’ll see the typical diffusion of innovation curve. It describes the breakdown of typical mentalities in a business.

The first 2.5% are the innovators. These are the people that are fiddling with things way before anyone else.

The next 34% are your early majority.

This takes you to 50% adoption. The last 50% of adopters are your late majority and finally your laggards being the last 16% typically.

The magic number we are looking for to achieve an adoption tipping point with technology so that it gains widespread acceptance in a business is around the 16% mark. In my experience getting to the 16% mark alone won’t guarantee your business wide adoption of a technology like SharePoint. You certainly can’t succeed without it, and it is the critical first step, but adoption success requires something further.

You also can’t use the same strategies with early adopters as you can with laggards. Each requires a unique approach.

For innovators, it is all about being first, being recognised as a leader and standing out from the crowd. While for laggards it is typically about time and convenience.

Your innovators are the smallest audience in a business making them the ones you should work with first. They need to be identified and then included in ‘exclusive’ adoption programs where they are given the initial opportunity to utilise the latest technology. Part of the responsibility of being considered an innovator is the expectation of passing knowledge on to the early adopters and easing their up take of the technology. Achievement of this knowledge transfer by innovators needs to be rewarded and recognised publically. It is important to note that innovators are driven far more by recognition than they are monetary rewards.

Once you have a successful adoption program in place for innovators now it is time to turn your attention to the laggards. This audience has no interest in technology, typically they see it as an impediment to doing their job. The adoption program you implement here needs to focus on benefits to getting the laggard’s job done, and this typically means allowing it to completed faster or with more convenience.

An example of something in Office 365 or SharePoint that appeals to laggards is the search ability across the data, allowing them to find what they want with minimal effort.

In essence, both innovators and laggards are strongly driven by the ‘what’s in for me’ mentality but for innovators it is about external benefits, while for laggards, it is about internal benefits in this regard. Understanding the core motivation of each audience is key to creating any successful adoption plan.

So there, you have some high level considerations and tips when it come to technology adoption. You now just need to develop specific adoption plans that make technologies like SharePoint and Office 365 appealing to those audiences. That only comes by understanding what motivates them and crafting the benefits to appeal to that directly.

Adoption of new technology like SharePoint and Office 365 fails when businesses treat everyone the same. There are distinct audiences inside any business and when it comes to adoption you simply can’t change those attitudes no matter how hard your try. So rather than fighting these, you need to tailor a strategy specifically to each audience. Only then will you stand a good chance of wide spread adoption. if you don’t, you are doomed before you fail in my books. Don’t believe me? Take a closer look at any failed technology implementation and you’ll find the root causes in what I have oulined here. I guarantee.