Before I give you some more thoughts on the coming new look and feel for SharePoint Online Document Libraries let me preface all this with a few things:

1. I am coming at this new interface with a certain ingrained bias. Firstly as an IT ‘dude’ and secondly as a long time SharePoint user. I’ve been working with SharePoint Document Libraries for a very long time inside Team Sites and any changes I see are always viewed through this lens. Many others don’t have these long standing biases.

2. There were some issues with the initial roll out of the new look Document Libraries to my tenant and for some reason the navigation on the left of the screen (that shows the remainder of the Team Site) wasn’t displaying. 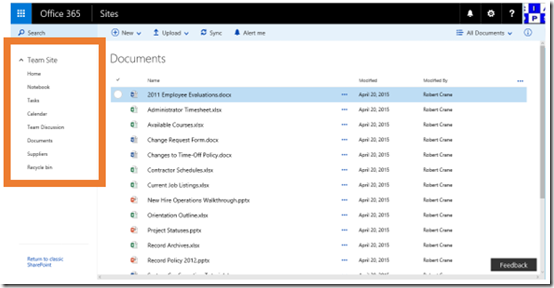 As you can see in the above image, the Quick Start Menu is now basically rendering which does make navigation much better and far less siloing than I thought when I initially saw the new format. 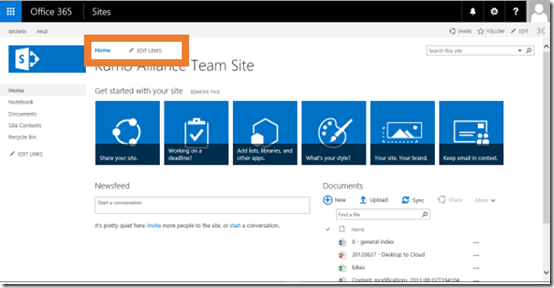 I will however note, that at this stage the traditional Top Link Bar doesn’t display in the new format. In most cases you use the Top Link Bar to navigate to different locations (i.e. Subsites) within your structure.

– This new look and feel for Document Libraries is part of a much broader set of changes that are coming to SharePoint Online. Microsoft has yet to fully announce these plans but we should expect to see an announcement at the Future of SharePoint event, on the 4th of May, which you should sign up for.

With that said, and with some extra poking around I have found the following:

1. The update is currently available only to those on office 365 First Release but will eventually roll out to all users.

2. In the Advanced Settings for the Document Library there the following option:

3. You can now upload folder to a Document Library.

As you can see from the above, you can now upload folders directly into a Document Library. This is not possible directly using the ‘classic’ interface. This going to make getting information into SharePoint Online much easier. 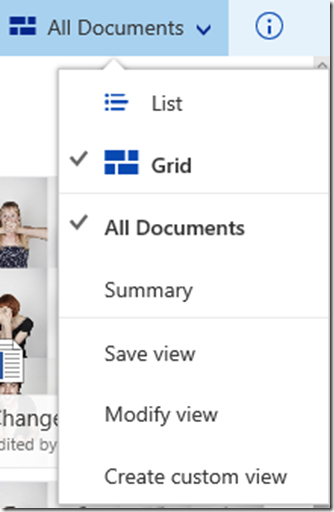 In the top left you’ll find the All Documents menu that allows you to flick between your different existing Views but also to swap to a Grid. 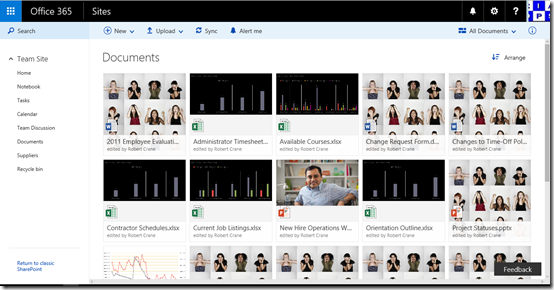 This makes the page look very much like Delve, which I personally believe is where Team Sites are headed towards.

5. You can now easily pin a document to the top of a library.

Again, very reminiscent of Boards in Delve to me. 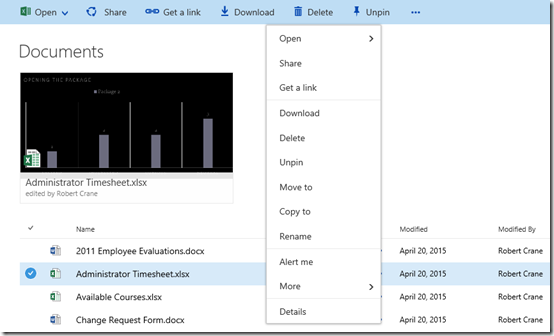 Right clicking on a file still brings up a context sensitive menu as you can see above.

8. The ability to add columns to the view is now much easier. 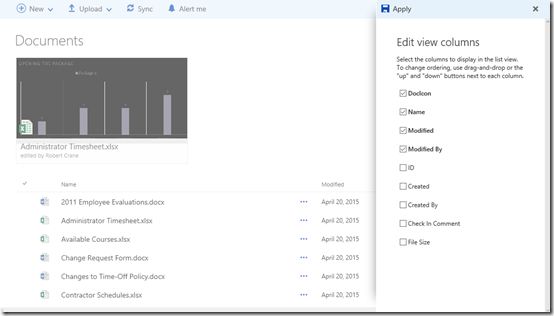 If you select the three dots at the right of the column headings a menu will slide in from the right allowing you to select exactly which columns you want to display. This is much easier for an user to work with than going through and having to create separate Views.

9. You can enable the information blade. 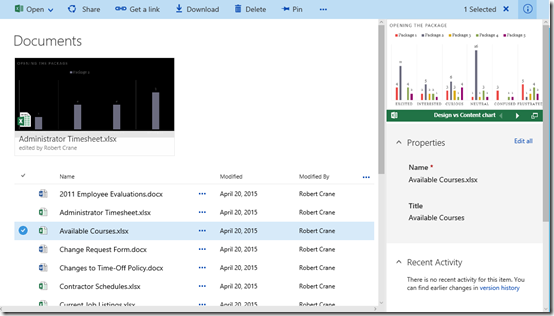 If you select the i icon with a circle in it in the top right hand corner an information blade appear on the right that display the properties of the file you have selected. Here you get a preview, can edit other information about the file, view sharing and so on. the information in the blade updates as you select different files.

This is a much better method of exposing file information for users than having to go through the ‘classic’ Ribbon Menu.

10. The Ribbon Menu has been deprecated in the new interface.

As you see from the ‘classic’ interface the Ribbon Menu was a major major way people interacted with the Document Library. However, for most users, the ribbon contained buttons they could use, didn’t understand what they did or were just so small they couldn’t read them. 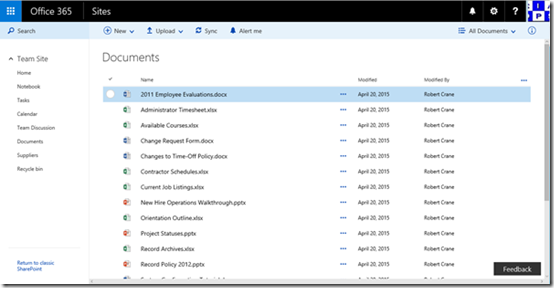 The new interface is a lot cleaner and easier for the ‘average’ user to work with (not a crusty old SharePoint person like me).

One of stumbling blocks for SharePoint was that it was, well, SharePoint. There are some strong reservations about using ‘SharePoint’ based on previous bad experiences. Even when new and improved versions come along, these old biases are hard for many to shake. Having SharePoint not look like ‘old’ SharePoint makes sense when it comes to wider adoption.

So in summary, there is plenty to recommend this new look and feel for Document Libraries. It is important to remember that we are in the middle of a transition to a new way of doing things with SharePoint so we’ll have to wait and see what happens when all the pieces fall into place.

I will however say that changing Document Libraries is changing the fundamental way most users work with SharePoint and I would contend, files in Office 365. That is going to impact a lot of people. That is going to mean a change for most and change is always a hard sell. At the moment we are in transition and change is coming slowly, but it will still freak a lot of people out. The more used to ‘traditional’ SharePoint they are, the more freaked they are going to be (at least initially).

Those who have invested a lot in their Team Site look and feel are going to face challenges with these changes as the interface in the new look and feel is, at the moment at least, completely different and also doesn’t as yet carry across much existing Team Site theming. Having a different look and feel could be quite jarring for some.

We are yet to see how traditional navigation (like the Top Link Bar) will be handled along with some other traditional SharePoint elements. I’m sure however all will be revealed very soon but I expected SharePoint Teams Sites to become more and more like Delve every day!

Kudos also to Microsoft for updating their documentation for these changes so fast:

What is a document library?

Which you should look at for more information.