It is easy, with all the hype around, to believe that digital currency is only about Bitcoin. That however, could not be further from the truth. There are in fact hundreds of other digital currencies that fail to get main stream media focus. This is understandable given the overwhelming status Bitcoin has in the market, as well as its first mover advantage. It would however be foolish to dismiss these alternate currencies (known collectively as alt coins), now or in the future.

Although Bitcoin was the first, it is by no means the last when it comes to working in the digital currency space. Just have a look at: 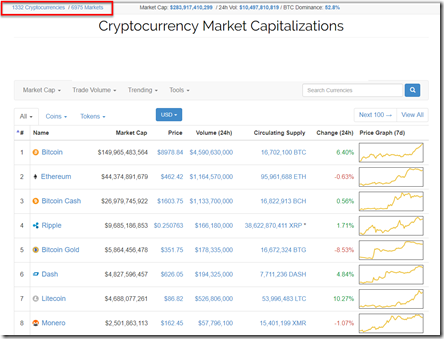 For a list of the most popular digital currencies and their market capitalisation. The second most common digital currency is something known as Ethereum and is in many ways very different from Bitcoin. Ethereum does not have a limited number of available coins like Bitcoin does and it is can be used in more ways than Bitcoin. Ethereum, for example, can be used to enact smart contracts on the blockchain.

To understand the basic differences between Bitcoin and Ethereum take a look at this video:

Imagine that instead of money you wanted to exchange ownership contracts on a parcel of property. The traditional method currently involved working with paper document and third parties for verification. Imagine if all of that could be replaced by a simple digital transfer of the property title, done on the public blockchain for free? All titles could then not only be easily transferred but also verified and maintained over the ages.

Think about a loyalty points system, like those offered by airlines. If you consider these as a type of currency, imagine how easily they could be implemented using the blockchain. After each trip, you’d automatically get additional frequent flyers ‘currency’ that would be recorded in the blockchain. You could then easy cash these in for rewards or use them for additional benefits. All transactions would be recorded on the blockchain and remove the need for a centralised ledger. Given that many reward programs extend the accumulation of points to other purchase, such as refuelling. Imagine immediately after paying for your fuel your rewards program is automatically credited with the appropriate amount of rewards points from the airline. No longer would you have to wait to month end to accumulate points. No longer would you have to wait till your printed rewards statement appears in the mail.

There are really so many applications for blockchain technology, currency is simply one of these. Because everything is software and typically open source, this means anyone can take the code and potentially create their own currency. At the moment, the majority of blockchain technologies are being used like currencies and typically for storing value but as acceptance increases expect to see more and more currencies appears, especially from major players.

If you wish to invest in digital currency you can do that via a wide variety of offerings. Each has different characteristics and support so you need to understand what you are investing in. There are also variations of original coins as well that implement the blockchain differently from their parent. Bitcoin itself has a number of variations (or forks) as they known. These include Bitcoin Cash, Bitcoin Gold and a rumoured Bitcoin Diamond. Each have slight technical variations in the way they implement the algorithm from the original Bitcoin.

Such variants still need the support of purchasers, merchants and miners to be successful. This is were things get interesting and to an extend why Bitcoin as the first mover has had the advantage. The reason Bitcoin cash was created for example was to reduce the transaction verification time and cost when compared to the original Bitcoin. Has it succeeded? It is certainly becoming more widely supported and many ardent supports believe it will take over the mantle of begin the ‘true’ Bitcoin.

Until then, there is going to be a lot of speculation and fluctuation in the price and that is what makes the future so exiting. What will be supported by the majority of users is yet to be determined and is probably a few years off but there is little doubt that digital currency built on the blockchain is here to stay and will fundamentally change many of our interactions. The future looks like it won’t simple be a place of single global currency as some would imagine. It will in fact be a place full of various ‘currencies’ each performing specific roles for specific demographics. Being digital means that working in this world will be far simpler than it is today and that is a good thing.