This is a follow on from the part one, which you can read here:

Before investing another $100 in Facebook advertising I went away and “improved’ the destination site which is here:

Getting Started with SharePoint Online

I added a promo video and did some work on the text while focusing on answering the need of those who had clicked on the ad to come to this destination. I focused the text on being more “colloquial” and less clinical, more friendly and less technical. I also changed the secondary title to:

“If you need to learn SharePoint and OneDrive for Business but don’t know where to start, this is the solution”

The reasoning for all this was that the ads were generating clicks but theses were not converting. Thus, the destination was not compelling enough. Thus, make the destination more compelling should result is some conversion right?

Wrong! As you can see from the above results, after 7 days I received basically the same amount of clicks and reach (so that part is consistent) but after about 2,200 clicks now in total I’m still striking out. Here’s the complete results so far since day 1:

Ok, so what to try next?

I’m thinking that I will now take cost of the course out of the equation. What I’ll do is throw open the doors to the first two lessons for free. That should at least allow me to see whether people are interested in the content. I’ll be able to tell that by the time they spend on the site. 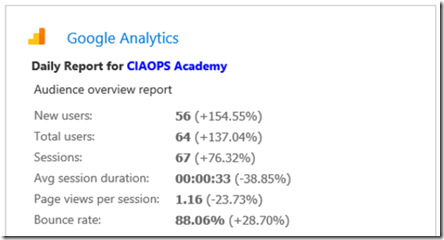 At the moment they are only spending about 30 seconds as you can see above. If this average increases I’ll get an indication that the content is appropriate, if it doesn’t then I might need to rethink what the course contains.

I’ll also change the price of the course to $69 but give a 40%+ immediate discount back to original price of $39. Thus, instead of:

Where did I get the 40% discount figure? I had a look at a few other sites that are offering the same sort of ploy on their courses and the average discount was about 40%. So let’s see if an immediate discount incentivises purchases.

Let’s now see what happens after I make these changes and we throw another $100 of credits at Facebook ads.