Microsoft has announced that dial in PSTN conferencing as part of Office 365 provided directly from Microsoft (i.e. Microsoft provide the dial in phone access for conference calls), specifically via Skype for Business will be available from the 1st of September 2016 in Australia. You can read more about the announcement here:

Although you have been able to do dial in PSTN conferencing via a third party provider for a while here in Australia, this the first time the service has been offered by Microsoft directly. 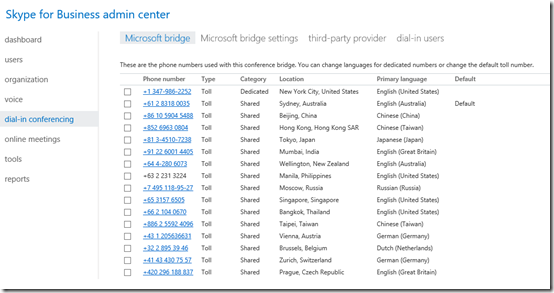 Once your tenant has been enabled for PSTN conferencing, when you go to the Skype for Business Admin area you should see Microsoft Bridge option as shown above that lists all the dial in numbers from locations all over the world. 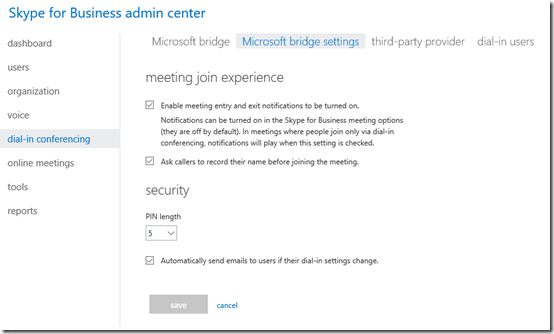 You can also go into the Microsoft bridge settings as shown above to set additional options. 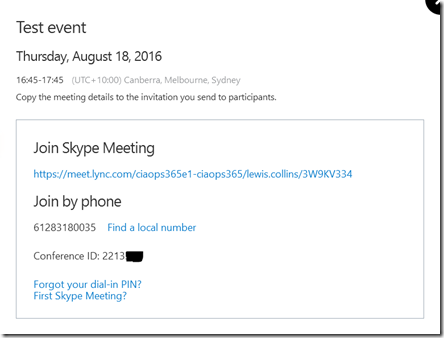 Basically how Office 365 dial in conferencing works is that the meeting organiser sets up a normal Skype for Business meeting exactly as they have always done. Provided that user is enabled for PSTN conference dial in, the meeting details will also include a conference id as shown above which is typically unique for that user (here the last digits have been blacked out for privacy).

However instead, if the meeting organiser wants to join the meeting using only a phone they dial one of the access phone numbers listed above. After dialling this they will be prompted to enter a unique meeting code (the conference ID) that was generated when the meeting was created (blacked out above). After this, as the meeting organiser, they then enter their unique security pin number (provided when they are assigned an Office 365 PSTN conferencing license). Once the unique pin number has been entered they are joined to meeting as an organiser and can manage the call and attendees.

Any other attendee who wished to join via a phone line simply dials an access phone number and enters the conference id to join. Simple.

Once a user has been licenses for PSTN conferencing they need to be configured with a PSTN provider as shown above. One of these providers is now Microsoft. 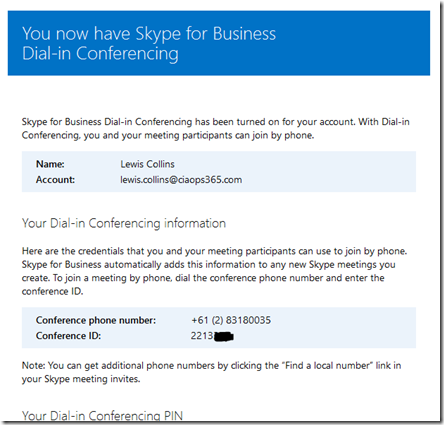 They also receive a confirmation email with all these details as shown above. 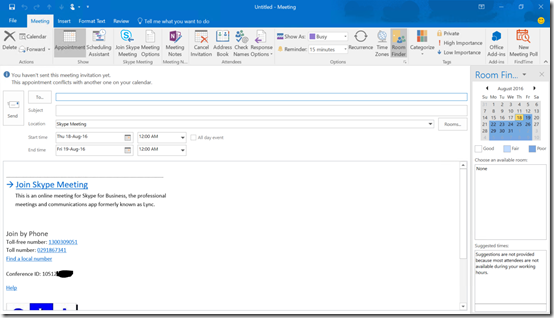 Now, if they organise a Skype for Business meeting, the dial in details will automatically appear in the invite as shown above. They can then send that invite to anyone who will be able to connect either via Skype for Business, a browser or simply via a phone. Easy.

The only thing that I don’t have information on as yet is what the PSTN dial in conferencing costs will be from Microsoft and how they will be charged. I assume that all this will handled like the existing Office 365 licensing and hopefully directly via the CSP program. That should allow resellers to be able to bill direct and manage the amount charged to customers, thereby making some margin. However, at this stage, I have no specific details on how the billing will be handled or the cost involved but I’ll certainly let you know as soon as I do.

Now all of this is extremely exciting as it is providing us here in Australia features that have been standard in other part of the world for a while. However, what excites me more is that fact that with the delivery of PSTN conferencing the full Office 365 Cloud PBX functionality, including the ability to call any phone number directly from Skype for Business can’t be far away. That is going to be a huge game changer, especially in the SMB market.

So my fell Aussies, get ready for PSTN conferencing in Office 365 directly from Microsoft here in the land down under from September 1. Also keep your eye on the horizon because the full Office 365 Cloud PBX and PSTN calling are not very far away I would suggest.