So, in the last post I demonstrated how to create an SMB file share on Azure and use it as a mapped drive replacement for users who wanted such an arrangement, typically to mimic and existing on premises file server. That however is only half of the business case for such a solution. To make an informed decision we need to consider both the Azure SMB File Share performance and pricing.

Performance first. For this I used a standard set of files, about 83 MB in total that included small (1MB) Office documents (PowerPoints, Word, Excel, etc). I also include a few larger videos files (>10MB) in this group of files as my benchmark. I then uploaded these files from the local drive of my workstations (I tried on Windows 8.1 and Windows 10 to get a kinda “average”) using the same browser over the same connection (ADSL – download speed about 12 Mbps, Upload about 0.6 Mbps). During all the test the workstations were not doing anything and there was nothing else going to the Internet for the duration of the file transfer. Both the Office 365 destination tenant and Azure file share destination container were in the Australian data center region.

With that process as my baseline you can see the results that I got above when I transferred the same files to OneDrive Consumer, OneDrive for Business and the mapped Azure drive (using File Explorer).

Some general observations from this data are:

1. Uploads to OneDrive consumer were noticably slower. You get what you pay for clearly.

As a comparision I copied the same data up to an Azure Windows 10 virtual machine running in the Australian region. The transfer of the data there using the RDP client took about the same amount of time as upload to OneDrive or Azure file shares but HOLY COW, look at the difference once the data is actually in an Azure virtual machine as the chart shows!

Above are the raw figures for a comparision of just how much faster things are. In somes cases up to 200X.

1. Bandwidth MATTERS! The limiting factor for all my uploads to OneDrive and Azure file shares from my desktop is my connected bandwith up to the Internet.

2. If you are going to go through the pain of moving your data into the cloud, it is much better to access that data from a machine that is also in the cloud, preferably in the same datacenter.

3. If you want to migrate “totally” to the cloud not only should you consider your data but how that data is being access. If you move both your data and your desktops to the cloud you could potentially see a 200X performance improvement over accessing the data on a local desktop.

So in summary. Azure file share performance is no worse that using other methods of acessing files in the cloud but if you can also have virtuals desktops in the same data center, holy smokes is it quicker.

Now pricing. For this I used the standard Azure pricing calculator at:

and here are the results based 100GB of stored data being overwritten every month. 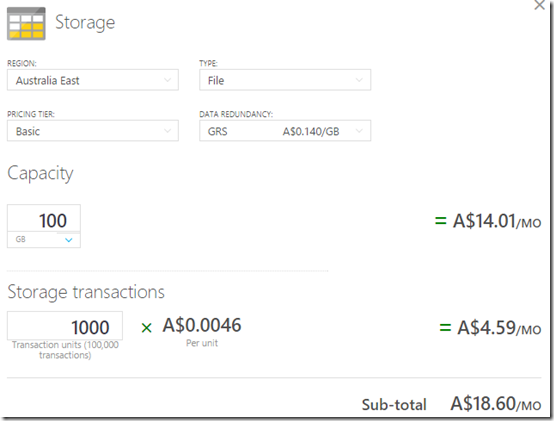 The first requirement when pricing an Azure solution is the cost of storage which you can see above comes to the princely sum of A$18.60 per month for 100GB. 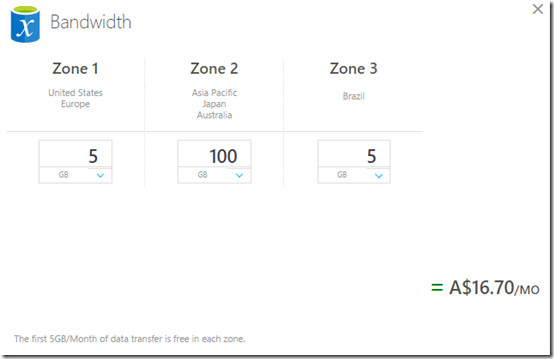 You then need to allow for data transfers. Azure only charges for data out of Azure not in and you also get the first 5GB to any region free. So for 100GB of tarnsfers you’d pay A$16.70 per month. 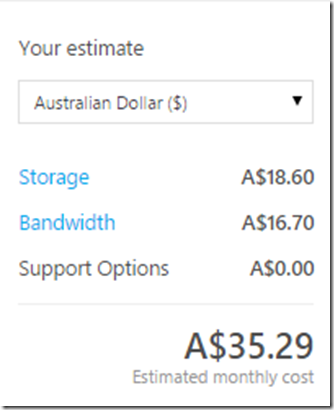 As you can see above, the grand total would be A$35.29 per month for 100GB of georedundant data storage using an Azure file share.