It doesn’t matter whether you have the best technology, if people don’t use it then it it totally useless. It is very common for users to have access to a suite of services like Office 365 but rarely use anything more than mere email. Why? Because adoption was not considered something important in the migration and implementation process. I’ve talked about this before:

Another key aspect about average users is that they are resistant to change, far more so than those in IT. This means a different process needs to be considered when it comes to introducing new technology to this demographic. One of the major keys, I’d suggest, to successful adoption is fostering ownership.

What do I mean by ownership exactly? What I mean is that users will adopt technology far quicker if they feel a sense of ownership (and control) over what they use. So with a product like Office 365 how does one go about delivering this ownership? 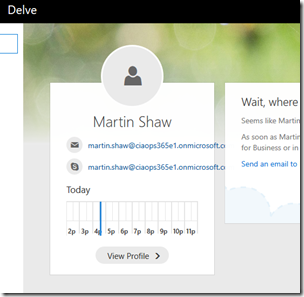 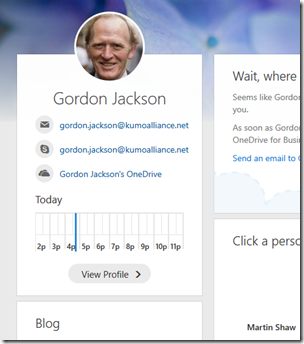 A good example is ensuring that every user has their profile picture set across the Office 365 services as you can see above in Delve. Having your own photo there in Delve immediately gives you a sense of ownership, a place that is ‘yours’ if you may. Having just an outline still makes the system all about IT. It is mere technology. However, with my picture in the profile then the system is ‘mine’.

One suggestion I have for businesses looking to drive Office 365 adoption is to pay for a professional photographer come in take high quality head shots of everyone so they can be used in Office 365. Users can then also use those head shots elsewhere like in Linkedin profiles.

Although most migrations to Office 365 start with email I’m an advocate of implementing Yammer first. Why? Firstly, Yammer has zero infrastructure impact, it is delivered totally via the web. Secondly, it has a mobile client that users can interact with inside and outside the Office (remember the phone is the desktop). Yammer also allows a users voice to be ‘heard’ and encourages ‘water cooler’ style chat online. Finally, Yammer is very much like other social networks that users are familiar with so the barrier to entry is much lower. In essence it becomes a users ‘presence’ in the new environment.

I also don’t recommend starting off with formal business groups in Yammer, I recommend setting up two groups, Social and Office 365 Q & A. Social is designed for general company ‘chit chat’. That is birthdays, best wishes, travel photos, footy tipping competitions and the like. The aim here is to get people using Yammer and comfortable interacting online. If you start with fun, then you are much more likely to see adoption. The Office 365 Q & A area is designed for users to post and share general information about Office 365.

When you implement a pseudo ‘help desk’ like this using Yammer a magical thing happens. For the majority of users it gives them a place they can ‘unload’ their questions and search for answers. However, the magic happens when other users, without prompting, take it on themselves to start answered those questions. Soon you end up with a self supporting help desk and training area in Yammer and all you did was simple tell people how to get there.

After Yammer the next Office 365 workload I suggest you target is OneDrive. Why? Again, because it is ‘personal’ to the user. It is their ‘space’ to upload their own private files. If you force them to go into a Team Site to work initially the change is generally too great. By getting them into OneDrive first you give them valuable experience working with just Document Libraries. This means when you introduce Team Sites down the track they already know something about how to use it, it also looks familiar so it also easier to adjust to and adopt.

After OneDrive then I’d suggest you get your users into OneNote. Show them all the benefits of creating a digital notebooks that is searchable, automatically backed up and available on all devices. Again, the important point here is to start with a personal OneNote for them so they get the feeling of ownership and are not afraid to play around with the technology. This experience will again stand them in good stead when it comes to work with group notebooks.

So in summary, my recommendation on adoption with Office 365 is to make the experience ‘personal’ to start with. I’d also suggest that rather than implementing just emails alone you do things in this order:

That should at least get you started and make your users more open to consuming and utilising the other parts of Office 365, because they now feel some ownership and control of the technology. There will be of course, more adoption work to do but hopefully I’ve given you some ideas on what to focus on to get started and appreciate how successful adoption is about being ‘personal’ rather than being just about technology.