This is a follow on from the two previous parts, which you can read here:

After modifying the copy of the destination site:

Getting Started with SharePoint Online

The other thing that I did was also offer two lessons as a free preview so people could get a better idea of what the course is all about. The theory here was that if people received a free sample they would be more likely to purchase. Again, in theory.

With these two changes in place I re-initiated the Facebook ads. However, there was still something bugging me about the numbers in the back of my mind.

As previously mentioned, I had always thought that with 2,000+ clicks or so that there should have statistically been at least one conversion. Why hadn’t there even been one via dumb luck?

I then started digging into the reporting and discovered the reason! When I segmented the report by country I found the above results.

D’Oh. I got seduced by Facebook numbers. When I initiated the ad I though “sure, I want to target this at the whole world. The more the better right?’’. WRONG. I should have started out targeting the ad at the locations I saw as my target market, i.e. Australia, U.S., U.K., etc. Rookie mistake.

However, this also raises another interesting learning in all my research on Facebook ads. Not one, ‘so-called’ expert had every said that I should start with a small target market and grow from there. No one pointed that having lots of click doesn’t mean these clicks come from where you desire. My faith in ‘so called’ experts’ in this area therefore still remains very low.

I then adjusted the audience for the ads to the above. 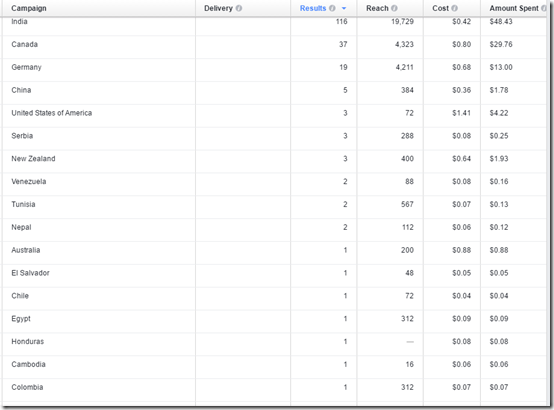 You can see above the new results. Most of the clicks now came from the desired locations, however I still got clicks from places like Nepal?? How did that happen?? I didn’t specify that as a location. Hmmmm…

Of course now that the ads are targeted at more desirable markets the cost per click increases. That I understand.

Unfortunately, even after these changes I still didn’t generate any revenue! However, it did teach me two big lessons.

1. Start with the smallest targeted audience possible and scale from there. If you go too broad, your investment will be consumed by lots of clicks from locations that are really not your target market.

In my case I started off with the audience being the world, rather the smaller audience of Australia, N.Z., U.S. etc

2. I have also come to conclusion that Facebook ads are more about ‘drive by interest’. By this I mean you are advertising to people who have indicated an interest in a topic (say SharePoint) rather than someone with a particular need that you get from Google because people are typing in what what they are searching for.

This, I think, makes advertising to a Facebook audience much harder. Why? Because people are probably likely to click and have a look at your content but that is simply out of interest rather than a specific need. That means you need to have a really compelling message and process for conversion. Tough.

Contrast that to people who type a particular search into Google using something like “Good SharePoint Online Training”. Such people have a real and immediate need. They are already well down the path to purchasing something to solve their need. This is a fundamental difference between Facebook and Google Ads (again, something that no one seems to highlight in any of the literature that I read).

Ok, so after spend a couple of hundred dollars on Facebook advertising, it is time to re-group and have a think about all this. I’m kinda thinking that online advertising is probably not the best vehicle for driving business to my online courses. However, I’m thinking that I might take what I have learnt and try and grow my email list.

Driving people to my email list will have less friction than my online courses for a number of reasons. Firstly, it is free and secondly it is something that people with a general interest (but no burning issues) should find appealing.

Now the challenge is that the current sign up page for list isn’t really optimised for ‘appealing’ conversion. Thus, I’ll probably need to put together something more sophisticated if I want to convert people. Maybe I don’t. I’ll have to see now won’t I?